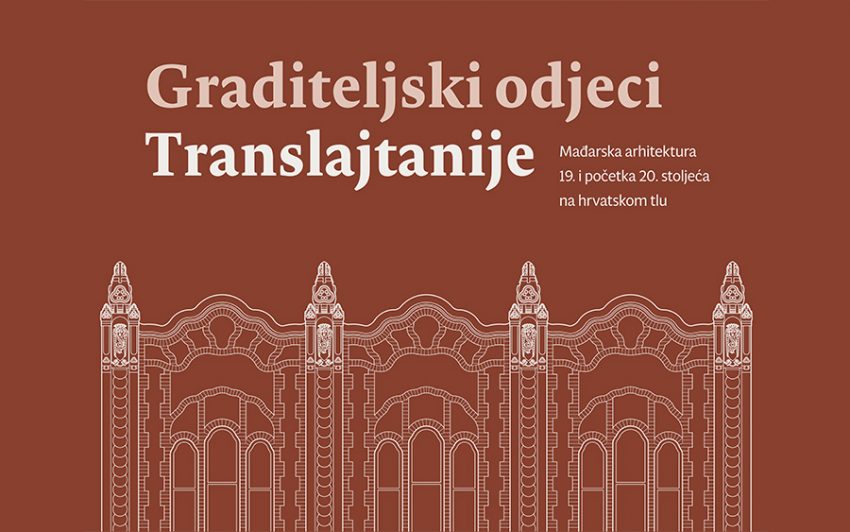 The exhibition Architectural Echoes of Transleithania: Hungarian Architecture of the 19th and the Beginning of the 20th Century in Present-Day Croatia opens on Thursday, 19 May 2022, at 7:00 pm in the Exhibition Hall of the Public Open University Velika Gorica (POUVG, Zagrebačka 37, Velika Gorica).

The exhibition is held as part of the manifestation Days of Hungarian Culture in Velika Gorica (19–21 May 2022), and will remain open until 2 June 2022. It was created as part of the bilateral research project “Architectural Encounters of Croatia and Hungary: Modalities of Professional Knowledge Exchange, 1900–1945” and realized in collaboration with the Institute of Art History in Zagreb. The author and the curator of the exhibition is Boris Dundović.

The exhibition is based on the author’s scientific research on Hungarian and Croatian cultural ties and their outcome in the built environment of the nineteenth and early twentieth centuries. The thematic scope and the time-frame of the topic is strongly marked by historical revival in arts, so to speak a synthesis of eight centuries of close monarchical coexistence of Hungarian and Croatian culture. Its peak was reached precisely in the period of the Dual Monarchy following the Austro-Hungarian Compromise of 1867, and lasted until the Treaty of Trianon of 1920, marking the official dissolution of the Hungarian Kingdom after the First World War. As part of the Days of Hungarian Culture 2022, this exhibition will present the rich heritage of Hungarian architects in what is present-day Croatia, but also makes a contribution to the understanding of the strong architectural heritage interweaving the two nations.

The researched architectural achievements led to the definition of four thematic modules of the exhibition – Rijeka and Zagreb as two metropolises in the making, then smaller towns of a provincial character at the time, and finally manors as products of a specific country culture. In certain thematic modules, the emphasis is placed on the transfer of knowledge, the architectural practice of that time, and especially on certain design features that distinguish the architecture in question and make it unique. Although it is mostly about the leading Hungarian architects of the 19th and early 20th centuries, a period that has been well researched in the history of Hungarian architecture, their role is integrated into a new problem-thematic research topic that looks at individual architects’ works from the position of transfer to Croatian ground.

The number of works assembled for this exhibition clearly shows that these are realizations which reflect different degrees of architectural contribution, from their size and location, through the choice of stylistic features, to the social and cultural role. The choice of style mainly followed the purpose of the building, and the design tendencies – including the then most modern spatial and technical solutions of buildings – are in accordance with the cultural impulses of the time, concurrent with Budapest. The fact that most of the architecture realized in this period is still used today for the same or similar functions is worthy of attention. The buildings were mostly built by local construction companies, which resulted in direct cooperation between Hungarian architects and Croatian builders and construction entrepreneurs. This, however, was not the only process of cooperation, because at that time architects cooperated with each other through professional associations and mediation of study trips where Hungarian architects got to know Croatian historical and contemporary architecture.

You can download the program of the Days of Hungarian Culture 2022 event in Velika Gorica here.